The basic position for the Nimzo-Indian Defence, a traditional and strong plan against 1. d2-d4. Black develops both of his kingside pieces and is ready to castle. The bishop on b4 is pinning the knight on c3 which gives Black indirect influence over the central squares. Sometimes Black exchanges the bishop for the knight and inflicts doubled pawns on White, who, however, obtains in return the strong bishop pair. White has numerous ideas with which to combat the Nimzo-Indian Defence.

Subsequently click on the name of the opening in order to get more detailed information.

With this pawn move White prepares the development of his king’s knight to e2 so as to recapture on c3 if Black exchanges his bishop. Like that he would avoid doubled pawns. In doing so he can first develop the knight to e2 or first move his light-squared bishop to d3. In the main variation Black castles short and thereafter attacks the white centre with the thrusts ...d7-d5 and/or ...c7-c5.

In the Classical System White develops his queen early in order to avoid doubled pawns by recapturing with it on c3 in the event of a possible exchange of minor pieces. The disadvantage of this is that White is delaying the development of his kingside meaning that Black can try to quickly open the play in the centre in order to exploit his lead in development. In the main variation Black castles short and then looks after the development of his queenside, but he can also immediately attack the white centre with ...d7-d5 or ...c7-c5.

With f2-f3 White starts an ambitious plan. He would like to follow up with e2-e4 with a total occupation of the centre. However, in doing so he delays his development of the kingside. Black generally reacts with one of the typical advances, ...c7-c5 or ...d7-d5,. But he can first bring his king to safety by castling.

The Sämisch System is a direct attempt at refuting the Nimzo-Indian. White forces the bishop to exchange immediately and accepts the loss of time and doubled pawns in return for the bishop pair. The compact pawn centre and the bishop pair should allow an attack on the king. White gets e2-e4 in as soon as possible and tries to block the centre. In the endgame White has problems with his bad pawn structure.

With this move White replies to the pin on his knight with a counter-pin on the knight on f6, but in doing so delays the development of his kingside.. Black can immediately attack the white centre with ...c7-c5 or first push away the bishop by means of ...h7-h6. 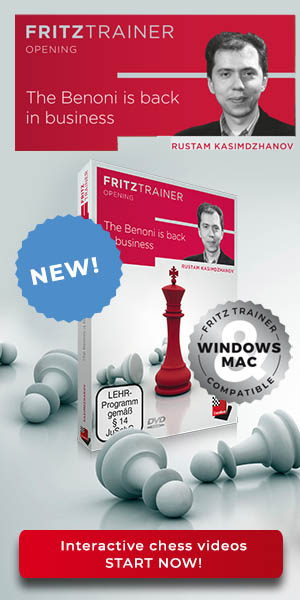